KAI SHAH HAS A DREAM

Muscular dystrophy sufferer Kai Shah has a dream: a goal to score some time with the England football team! 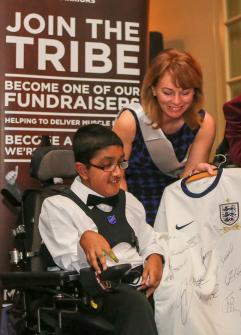 Thanks to specialist family charity The Muscle Help Foundation’s Muscle Dreams programme, 10yr-old Kai’s ambition will become a reality in March 2014 when he will visit the home of the National Football Centre to watch the England team train at St George’s Park near Burton-Upon-Trent in the National Forest. A few days later Kai will head to Wembley for the England Denmark fixture on Wednesday 5th March 2014. Pictured above is Kai receiving a signed England football shirt.

England players Ashley Cole, Gary Cahill, Frank Lampard, Jermain Defoe, Kyle Walker and Jack Wilshere were on hand to surprise Kai with the good news in a personal video message, complete with the charity’s signature Muscle Warrior salute, a symbol of hope, courage and strength for all those with muscular dystrophy.

The above short-clip was revealed at the charity’s Annual London Fundraiser held in London at The Royal Automobile Club in Pall Mall last November, much to the delight of Kai and his family who were present.

Thank you to the aforementioned players, the England Footballers Foundation and 1966 Entertainment for making it happen.