The clash in the picturesque Hertfordshire village of Albury was promoted widely (see poster below) throughout the surrounding villages and local towns. The match saw Ware TV FC put up a brave resistance against Albury CC XI, but fall to a noble 5 wicket defeat. Experience told as Albury CC XI finished with 132 runs all out, while Ware could only manage 92 runs. Ware TV FC are more known for their allergy to winning football games then their cricketing prowess! 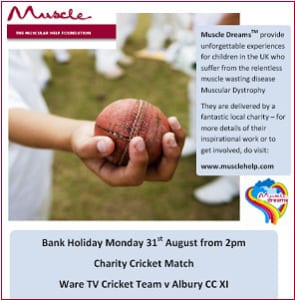 The game was played for UK muscular dystrophy charity The Muscular Help Foundation (MHF). Nearly £400 was raised at the event with all proceeds going towards MHF’s Muscle Dreams™ programme, which provides unforgettable experiences in the UK for children and young people afflicted by this muscle wasting disease.

Both sides pulled on their whites, laced up their boots and came together at the wicket to deliver MHF’s trademark Muscle Salute™ (pictured below), a visible symbol of hope, courage and inner strength for the 60,000 or so UK sufferers of muscular dystrophy. 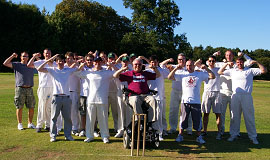 Commenting on the event, the charity’s co-founder Michael McGrath said: “Undaunted by their evident aversion to winning football matches, Ware TV FC turned their hands, their heads and their hearts to the willow and the hard ball – a real cricket match ensued against a real cricket team (Albury CC XI) in aid of the charity. The match was played in high spirits on an extremely warm summer afternoon. The BBQ was sizzling thanks to a number of supporters and despite the colossal efforts of Ware TV FC, not even the demon bowling of ‘Jake Klintoff’ or a supply of chilled Fosters could prevent defeat. The lost ball remains lost forever, but the resilient spirit of Ware TV FC remains strong as rumours abound of a re-match in 2010!”

McGrath added, “A big thank you to all those involved in helping to organise and promote this event. The posters looked fantastic and the many branded lamp-post signs within a 3 mile radius on all roads leading to the location of the match were, I know, really helpful to those who travelled from afar! It was a great team effort, a lot of fun and fantastic that nearly £400 was raised – every penny makes a difference. That’s precisely what it’s all about – my special thanks to Suzi Kelly and Steve Stoney Stone for their amazing support!”