Home » Latest News » TOGETHER, WE CHANGED SOME LIVES

TOGETHER, WE CHANGED SOME LIVES 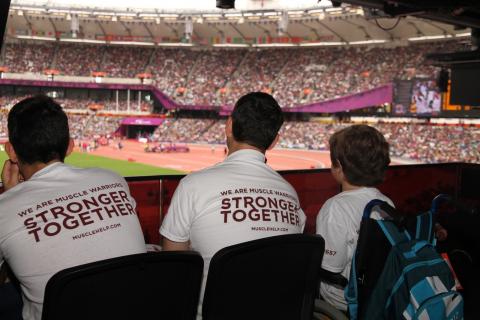 QUESTION: What happens when you combine a 6ft chocolate fountain, 45 volunteers, £80,000 and 75 beneficiaries from Ireland, Scotland, England and Wales with the London 2012 Paralympics? ANSWER: Watch this film, be inspired and then consider making a donation by either texting MUSC13 £10.00 to 70070 or by simply clicking the DONATE NOW With Virgin Money Giving button on our charity’s homepage.

The Muscle Help Foundation today announces the online premiere of ‘STRONGER TOGETHER’, an inspirational film that provides an insight into how the lives of 75 people with Muscular Dystrophy were changed as a result of the London 2012 Paralympics.

The Muscle Help Foundation (MHF) is a small family charity which delivers amazing and unforgettable experiences in the UK called Muscle Dreams for children and young people afflicted by the muscle wasting disease, Muscular Dystrophy. Today sees the launch of their short film on the charity’s flagship 2012 ‘Games Inspired Muscle Dreams’ (GIMD) programme.

The film which can also be seen on the charity’s YouTube Channel at http://youtu.be/NrQPXtAjGb4 was produced and sponsored by one of the charity’s supporters, award winning meeting and events agency Zibrant. It provides a compelling insight into the lives of 75 children and young people with the muscle wasting disease Muscular Dystrophy (along with their families) who successfully applied online through a bespoke nomination system.

Muscular Dystrophy affects over 70,000 people in the UK and varies in complexity with no known cure. As part of the charity’s on-going work, this innovative Paralympic related project was in development for over two years and was conceptualized by MHF’s inspirational CEO.

Over the 10 days of the London 2012 Paralympic Games, the programme provided beneficiaries with lasting memories and played an important part in driving some exciting legacy initiatives. Most recently, the establishment of a team of Powerchair Football players called Muscle Warriors all of whom have the most severe form of muscular dystrophy known as Duchenne or DMD. The disease affects the heart and respiratory muscles in around 1 in 3500 boys resulting in muscle degeneration and eventual death.

Commenting on the video Michael said, “The video highlights what a fantastic 10 days we had at the Paralympic Games, how lives have been changed and how people can get involved to support our work”.

Michael is calling for those who watch and are inspired by the film, or those who want to lend their support to either donate by texting MUSC13 £10.00 to 70070 or by simply clicking the Donate Now With Virgin Money Giving button on the charity’s homepage. 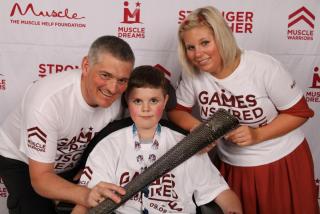 A series of ‘Musclympic’ welcome parties including a themed games room hosted by hotel partner Radisson Blu Edwardian New Providence Wharf at their stunning riverside location in Canary Wharf opposite the O2 Arena kicked proceedings off – there were also opportunities for beneficiaries and their families to have photographs taken with the Paralympic Torch and a carefully choreographed Opening Ceremony parade to the sounds of Vangelis Chariots of Fire took place each night on the boardwalk thanks to approvals given by international property developer Ballymore Group.

The overnight stay for all families was just the beginning of an incredible period at the Paralympic Park watching the ‘Superhumans’ in action in the various venues including the main stadium. There were several memorable face-to-face meetings with various athletes and personalities including the likes of Dame Tanni Grey-Thompson and London’s Mayor Boris Johnson.

This high profile event was featured on BBC News and the Channel 4 Paralympic Breakfast show (twice!) involving the appearance of one of the programme’s beneficiaries, Olivia Webster, with the charity’s co-founder and CEO, Michael McGrath.

Feedback from beneficiaries and families was extremely powerful, not least that 89% of families rated their Games Inspired Muscle Dream as ‘excellent’.

Project Manager Ros Cramp said, “this charity stands apart from others because of Michael, who through his daily life gives hope to others. One beneficiary aged 21 wrote ‘you are such an inspiration with how positive and determined you are, which is something I strive to be in my own life’. 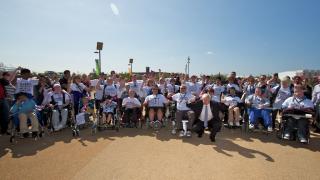 The programme was supported by nearly 50 dedicated and passionate volunteers who were not only enriched by the experience but also many of whom grew as individuals during their marathon 24-hour beneficiary hosting duties.

“The event involved over two years of planning; it was a huge success in every respect. I know that it has left a positive legacy with all of our beneficiaries”, said McGrath, affectionately known as the Chief Muscle Warrior.

Endorsed by Lord Coe, the programme was granted its Inspire Mark (part of London 2012’s brand family) by LOCOG that recognises innovative and exceptional projects directly inspired by the 2012 Olympic and Paralympic Games. The programme could not have happened without the support of so many volunteers, the charity’s operational team and of course our sponsors.

“Whilst it’s been an exhausting few years, I’m absolutely thrilled that the original vision conceived just after London won the bid has been realised. I wanted to make sure that the charity got involved and played its part. Our beneficiaries from around the country including a cohort from Scotland, Wales and a family from Ireland witnessed something extraordinary and were undoubtedly inspired by the achievements of so many Paralympic athletes; our volunteers willingly gave of themselves in assisting the charity and I know that, for some, engagement with our families has had a very deep and positive impact. As for my core team, they’ve been fantastic. Together, we changed lives!”, concluded Michael.

TO DONATE ONLINE
Click the Donate Now With Virgin Money Giving button on the charity’s homepage.