Nearly £20,000 raised for Muscle Dreams at The Royal Automobile Club 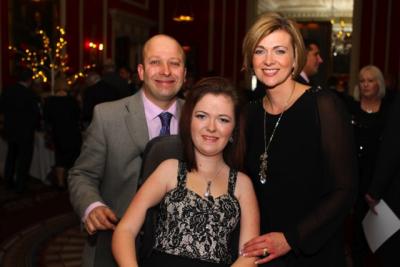 Key messages were personally delivered by this year’s dynamic duo – 14yr-old Muscle Warrior Becca Torricelli (pictured above with her mum Nicky and dad Steve) said ‘follow your heart’ whilst Jeffrey Archer said ‘dig deep’ and together with well over 100 guests, nearly £20,000 was raised on the night.

Becca from Worthing joined the charity’s flagship ‘Games Inspired Muscle Dreams’ programme in August last year to witness the power of sport at the London 2012 Paralympic Games. Becca who uses an electric wheelchair has Spinal Muscular Atrophy (SMA type-2). To aid her breathing particularly at night time, she uses a ventilator and despite being prone to catching pneumonia and other infections due to a weakened immune system, she is ambitious wanting to one day become a lawyer.

She spoke movingly about how Spinal Muscular Atrophy (SMA) has affected her life: “No-one without a disability realises the obstacles that people like me face on a daily basis. If you’re not careful, your disability starts to rule you. You feel on your own, helpless and not capable of doing what so-called ‘normal people’ do. But here’s the thing with the phrase ‘normal people’ that took me a long time to realise: there’s no such thing. If you took away all the disabilities, the different cultures, the different attitudes, we’re all just people, wanting the same outcome in life: to be happy. And I realised this from going to the Paralympics with MHF.”

Becca continued: “It showed me that despite what appear to be impossible challenges in the face of adversity, if you put your mind to it, anything can be achieved. It might be hard to get there; it might seem that all is lost, you might feel like giving up, but if you follow your heart, you will get there. And it will feel like the best thing in the world. That’s what the Muscle Help Foundation achieved when they took me and my family to the Paralympics. It gave me so much hope and courage to move on with my life and believe in myself. And I am finally comfortable and confident with who I am.”

Jeffrey Archer, who has raised more than £2m for charities through similar auctions, was won over last year by MHF’s mission, posting on his website: “If you’re looking for a charity to support, this one could do with your help, and I hope they ask me to be their auctioneer next year, because for me it was one of the happiest evenings of 2012.”

Archer joined other celebrities at the event, which raised almost £20,000 for this small specialist charity rooted in family values that delivers highly personalised experiences in the UK known as Muscle Dreams for children and young people with muscular dystrophy (MD) and allied neuromuscular conditions.

Also in attendance to present unique auction items were Olympic rower, Tom Solesbury, who competed in the quadruple sculls at the 2012 London Olympics; presenter of TV’s ‘Fifth Gear’, Vicki Butler-Henderson; 19-year old, top GP3 racing driver, Josh Webster (an Ambassador for the charity); and the Hon. Alexandra Shackleton, grand-daughter of polar explorer, Sir Ernest Shackleton. The Dusty Peddlers described as that little ol’ band from Leigh-on-Sea played brilliantly and the evening began with a welcome by Fay Sharp, Chair of Trustees and MD of Zibrant and was followed by a thought-provoking and informative insight into the charity’s work by MHF’s co-founder and CEO Michael McGrath, himself diagnosed with MD at the age of 18yrs.

McGrath shared a moving poem, written by one of the charity’s Muscle Warriors, 11-year-old Mason Fernley from Oxfordshire who participated in the charity’s inaugural 2013 WetWheels Muscle Dreams programme in August hosted by Disabled Seafaring Explorer, Geoff Holt MBE on the Solent. Funded through The Towers Party held on Sat 20 July which formed a part of this year’s hugely successful 2013 Taittinger Royal Solent Yacht Club Regatta, a cheque for £6,750 was gratefully received by the charity’s other co-founder Miles Peckham at a presentation dinner at the Royal Solent Yacht Club on Sat 16 Nov.

Mason has Duchenne Muscular Dystrophy (DMD) which is life-limiting. Boys are predominantly affected in early childhood – sufferers will usually only live into their early/mid 20s. Despite improved drugs and for example ventilator technology, there is no cure although better treatments can help manage symptoms. About 100 boys with DMD are born in the UK each year. In the poem, Mason describes how his life has changed since being diagnosed with DMD and how he longs to ‘jump, skip, run and be free’.

The fundraiser drew a huge crowed who bid generously for an array of auction items that included:

Michael McGrath said of the night: “I’m thrilled with the response to our Annual Fundraiser this year, almost doubling last year’s figure! On behalf of the charity, huge thanks to everyone including our Yr12 volunteers from Freman College namely Elena, Kate and Nathan who gave of their time so willingly to make it run so smoothly. My heartfelt gratitude to our special Muscle Warrior VIP’s … to Becca Torricelli who spoke so beautifully and with such dignity, to Kai Shah who’s Muscle Dream thanks to the England Footballers Foundation and 1966.com was announced via a personal video message amazingly put together just 48 hours before the evening started by some of the England players featuring Ashley Cole, Jermain Defoe, Frank Lampard, Phil Jagielka, Gary Cahill and Jack Wilshere and to Farhan Aziz one of the stars of our 2013 Film Premiere ‘Light it Up’.

And of course to our auctioneer Jeffrey Archer who once again brought his captivating style, his wit and good humour to the evening, making it both entertaining and productive! As a small specialist charity with extremely limited resources, we rely heavily on donations, people’s generosity and goodwill – whilst the funds raised will enable the charity to deliver more Muscle Dreams next year, our #657appeal continues to gather momentum! In time, we want to deliver 657 Muscle Dreams, one for approximately each muscle in the human body – so if you are able to give a regular monthly gift of £6.57 or maybe £65.70, you can do so knowing that you’ll be helping us change lives and give hope!”