Attracting 124 runners, plus many families and their little’uns from across the county, the stunning venue of Haileybury in Hertford Heath again provided a fantastic location for the 2nd annual Muscle Warriors 10K & 5K RUN on Sun 24 July 2011 that raised nearly £7000 – the event included a 1K Superhero Fancy Dress Toddle and a fast and furious 1K Wheelchair Circuit in aid of Muscle Dreams, amazing experiences in the UK for children with Muscular Dystrophy. 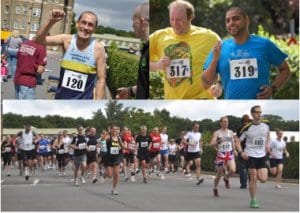 Michael McGrath, himself a sufferer of Muscular Dystrophy and the charity’s co-founder and Chief Muscle Warrior (CEO) said, “It was brilliant to see so many people enjoying themselves at Haileybury. We tried very hard to not only give all runners a great experience but also the many families and children who entered into the spirit of the wider event, a really memorable day out.”

“Special congratulations to our 10K winner Wayne Bell (Race No. 102) in a terrific time of 34:46 and our 5K winner Toby Hone (Race No. 310) who finished in a time of 18:36 Respect to Duchenne Muscular Dystrophy (DMD) sufferer and fully-fledged Muscle Warrior Matt Berry who powered around the 1K Wheelchair Circuit through the magnificent quad at break-neck speed sporting the most spectacularly colourful sneakers (pictured below) and also to Matthew Peasey who won the 1K Superhero Fancy Dress Toddle  … so many people dressed up in colourful superhero costumes. It was a whole lot of fun!”

“We’ve received many wonderful comments, text messages and various emails from both runners and families. In addition to nearly £7000 being raised for the charity, our goal was to deliver a great event but also raise further awareness about Muscle Dreams – this could not have been achieved without the incredible support of so many Muscle Warrior volunteers! Thank you everyone for making it such a success – you know who you are. Onwards we go to 2012!” he added.

The charity’s newest partner, a unique family business called RUGGERBUGS, organised a special RUN FOR THEIR LIVES event in support of the charity which saw many of their club locations (including Bancroft, Bishops Stortford, Braintree, Cheshunt, Harlow, Hertford, Medway, Romford & Gidea Park and Tunbridge Wells) toddling the 1K distance during their class sessions (the equivalent we’re informed of 21 times around a badminton court!) on the same day.

Representatives of the RUGGERBUGS team were on hand at Haileybury giving out colourful ‘Sidney’ stickers to the little-ones and the founder Andy Peasey delivered a friendly ‘Sidney’ warm-up for the many 1K superhero toddlers including mums and dads. “It was a fantastic day, well organised and we’re now really looking forward to participating in next years event,” said Andy.

Chief Muscle Warrior (aka Michael McGrath) commented “A very special thank you to Andy, Tara and all the RUGGERBUGS team members for their fantastic support on the day and to all those RUGGERBUG customers across the South-East region who contributed financially towards an extraordinary sponsorship total that currently stands at just over £1000.”

“I recently visited the club in Harlow and have witnessed just how much fun this innovative pre-school non-contact rugby development programme is – it was absolutely brilliant to see so many toddlers from as little as 18 months to 6 years old enjoying themselves! There’s a lot of energy in RUGGERBUGS and we’re really excited about the future opportunities that will undoubtedly emerge from this partnership. As for their amazing sponsorship efforts, I have it on good authority that ‘Sidney’ is incredibly proud!”

The event was also in support of the Cultural Olympiad Open Weekend celebrating almost one year to go on Wednesday 27 July to the London 2012 Olympic Games … exciting times ahead. Thanks to our friends in the Cultural Olympiad team at Herts County Council for providing their cool “Love to” goody bags! “Love to” is a countywide initiative aimed at encouraging more people in Hertfordshire to get involved in cultural activities on their doorstep.

“The whole event was massively enjoyable and there was a great buzz around the place. On the basis we are not on holiday next year, we will definitely do it in 2012”

“Great fun, excellent organisation (please thank all the marshals – they did a great job), great atmosphere during the warm-up exercises plus a lovely course. Thoroughly enjoyed the day”! 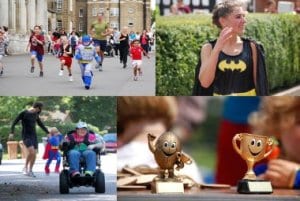 A very special thank you to Haileybury School for hosting the race and to the following organisations and individuals for supporting this event: