The Muscular Help Foundation (MHF) is delighted to be working for the first time with Merchant Taylors’ School supporting their annual 2008 Easter Phab Week initiative that will see approximately twenty disabled young people (including some with muscular dystrophy) enjoy an inclusive residential programme of structured fun activities taking place at the school between Monday 24th March and Saturday 29th March. 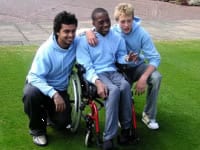 Every year, the school organizes this special camp in the Easter holidays, where pupils of both Merchant Taylors’ School and St. Helen’s School host a group of children with physical disabilities for a fantastic week of fun events such as bowling, shopping, a fancy dress disco, a gig, a fireworks show and a day out in London.

This year is the 50th Jubilee of national charity Phab England, as well as the 30th anniversary of Phab at Merchant Taylors’ School. Phab helps ‘to promote and encourage people with and without physical disabilities to come together and make more of life together’. The school is an active member of this charity.

On Friday 1st February 2008, the only disabled person in the world to have reached both North and South Poles delivered a guest lecture (organised by Will Struthers, Assistant Head of Sixth) to approximately 150 boys of the Upper Sixth Form at Merchant Taylors’ School near Watford. Before taking lunch, motivational speaker and MHF’s CEO and charity co-founder Michael McGrath met a number of teachers including Michael Bond (Head of Sixth Form), Dominic Howell (Head of Phab), some school prefects including Marcus-Alexander Neil (Head Monitor) and Stephen Wright (Headmaster).

A letter of thanks written by Marcus-Alexander Neil, the schools Head Monitor said “Thank you Michael for your motivating speech last Friday; many of the boys left the room inspired and reinvigorated and your words about teamwork and trust between one another has noticeably galvanized the year as we work towards our common goals.”

Michael McGrath said “I was delighted to have been invited to speak at Merchant Taylors’, a school known for its academic and sporting excellence, but also for its friendly atmosphere and community commitment. I particularly enjoyed chatting to some of the boys about their CCF experiences and my own memories of shiny toe caps and boot polish and of course their successes on the rugby pitch, a game I once played as a flanker at my old school Stonyhurst College in Lancashire.”

McGrath added “It was whilst having a brief exploratory conversation with Dominic Howell about the schools active community programme and specifically the synergies between Phab at Merchant Taylors’ school and those with muscular dystrophy that initiated where we are today; there is an obvious fit with the aims of our respective charities and as a result, MHF has also introduced The Jennifer Trust for Spinal Muscular Atrophy to Phab Week at the school resulting in 5 confirmed places being accepted to Phab Week, which MHF was delighted to fund.”

The Phab initiative allows disabled and able-bodied young people to share a common experience and each other’s company. It also provides a well-deserved respite and break for the caring families of the disabled children. For the selected Sixth Form volunteers of both Merchant Taylors’ School and St. Helen’s School, the experience provides a challenging platform but also one of the most personally rewarding and enriching weeks of their lives.

To raise the money needed to operate the week, there are fundraising events organised throughout the year such as gigs, revues, comedy evenings, concerts and sponsored activities all of which are arranged by the boys and girls of the respective schools. Nearly all of the £8000 required to run the week is raised by the school community.

This is a British boys’ independent day school, originally located in the City of London, and since 1933 located at Sandy Lodge in the Three Rivers district of Hertfordshire. The school was founded in 1561 by Sir Thomas White and is one of the original nine English Public Schools as defined by the Public Schools Act 1868. Today the school caters for approximately 827 students between the ages of 11 and 18 years. In the 2007 league tables MTS was 3rd best boys’ independent day school in the UK. 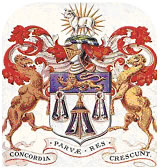 About Phab
Registered Charity No 283931
www.phabengland.org.uk

As a national charity, Phab’s mission is to promote and encourage people with and without physical disabilities to come together on equal terms, to achieve complete inclusion within the wider community and to make more of life together. The charity is dedicated to promoting the integration of people with and without physical disabilities, at all levels of society and has provided support and services for its members since 1957.

About The Jennifer Trust for Spinal Muscular Atrophy
Registered Charity No 1106815
www.jtsma.org.uk

The Jennifer Trust for Spinal Muscular Atrophy is the only national charity in the UK dedicated both to supporting people affected by SMA, and investing in essential research into causes, treatments and eventually a cure for the condition. Spinal muscular atrophy (SMA) is a condition that affects the nerves in an area of the spinal cord called the anterior horn. These nerve cells become damaged, breaking the link between the brain and the muscles. As a result, the muscles can’t be used and become wasted or atrophied.