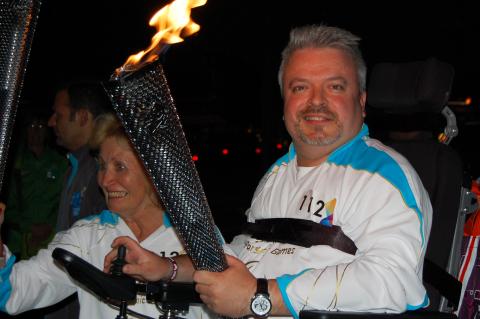 The charity’s founder and chief Muscle Warrior held his torch aloft proudly and was cheered by hundreds of people on his stretch of the flame’s journey through Hackney in East London.

The symbol of the Paralympic spirit was kindled last week and Michael is one of 580 torchbearers to assist its progress to the Olympic Stadium for the spectacular opening ceremony.

Supported by his new power chair, Michael stood up for the majority of the procession and fixed his mind on the 75 children and young people that will attend the Paralympics as a result of the MHF’s Games Inspired Muscle Dreams programme.