Last week I met one of the few people to manage this feat, but what made it more admirable is that Michael McGrath suffers from muscular dystrophy and spends most of his time in a wheelchair. This astonishingly brave man heads The Muscular Help Foundation. Michael was diagnosed with muscular dystrophy (MD) in 1983. This muscle-wasting condition has meant that his ability to walk has been reduced over the years, but MD hasn’t stopped him from leading a full and exciting life. I first heard of Michael after he had reached the North Pole and was embarking on his journey to Antarctica. We both share a love of that beautiful continent and an admiration for polar explorer Sir Ernest Shackleton.

Michael is inspired by one of Shackleton’s famous sayings: “Difficulties are just things to overcome.” And despite all his difficulties, Michael has overcome everything thrown at him.
He raised thousands for charity and also raised awareness of MD [Muscular Dystrophy] with his epic journeys. It’s ironic there are so many buildings in the UK wheelchair users find difficult to access, yet Michael was able to reach two of the most inhospitable and dangerous places in the world. I was so impressed by Michael’s sheer exuberance and passion. He never gets depressed or dwells on the unfairness of his condition. He just gets on with life and squeezes every last drop out of every day. He’s an incredibly inspiring speaker and a role model for everyone, disabled or not. 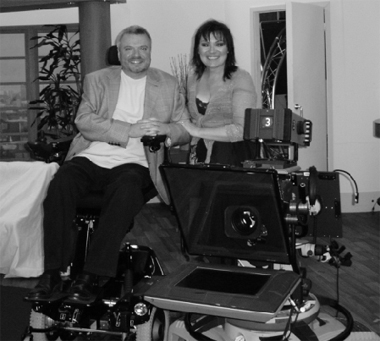