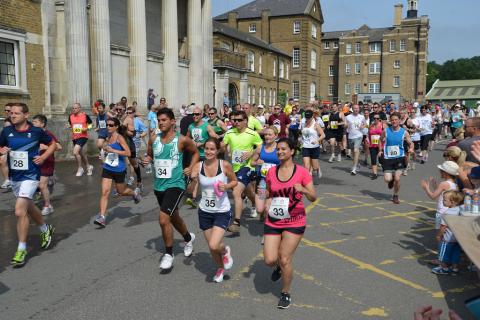 The Muscle Help Foundation raised nearly £7,000 this month as people strapped on their trainers for the charity’s annual Haileybury fun run.

The money generated by 151 runners and their supporters will go towards Muscle Dreams – once in a lifetime experiences for children and young people with muscle wasting disease Muscular Dystrophy.

The competitors entered three events encompassing the glorious grounds of Haileybury Independent School – which generously gifted their support for the fourth year running.

Some braved the 10km, while many took part in the 5km, but one of the busiest events of the day was the wheelchair 1km and family superhero toddle.

It was a tightly fought contest, particularly in the wheelchair race where MHF beneficiaries Matin and Gianluca featured. But it was Paralympic athlete Richard Chiassaro who – perhaps unsurprisingly – took the honours.

Chiassaro is a Paralympic World Cup T54 100m gold medallist and came along on the gloriously sunny day in Hertfordshire to lend his support to the runners. Here’s hoping we can do the same if he qualifies for the Rio Paralympic Games in 2016.

A special Muscle Warrior Salute goes out to a team from Garden House Solicitors, who returned to Haileybury for the second year on the trot and raised a whopping £1,000.

Other thanks are extended to Anna Clifford of Barefoot Therapies, who provided massages for weary runners and the Mr Whippy ice cream van, whose cones were in high demand on a baking hot day.

MHF’s CEO and Chief Muscle Warrior Michael McGrath said: “The event was a great success, both in terms of raising awareness of the charity’s work locally, but also much  needed funds so we can continue to deliver Muscle Dreams.

“A huge thank you to all our amazing volunteers who came along to help with  the event – despite very hot conditions, their energy on an early Sunday morning was absolutely  fantastic, truly Muscle Warrior-esque – we simply couldn’t do this event without their support!

“Special thanks to Haileybury for once again allowing us to use their beautiful grounds. We look forward to welcoming many more runners and  families next year – bring on 2014!”