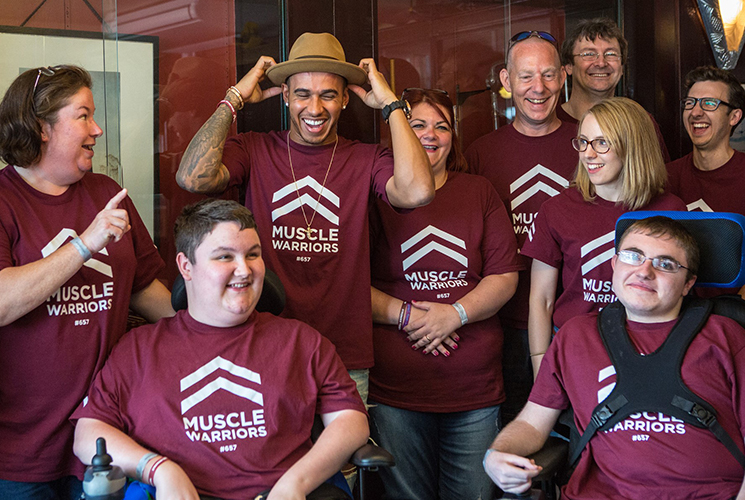 The charity has recently been adopted as the MERCEDES AMG PETRONAS F1 team’s official charity partner for the next 18 months and was invited to the company’s family day held at the Sywell Aerodrome (Northants).

Mercedes helicoptered in Lewis and Nico for the event, fresh from their triumph at the British Grand Prix, and MHF beneficiaries Cory August and William Arnott together with their families were granted a private audience with the superstar drivers.

As part of this unique Muscle Dream experience, the pair also had the privilege of meeting British racing legend Sir Stirling Moss (pictured below with William and Cory), who regaled the group with stories of his formative years having learned his craft alongside Juan Manuel Fangio at Mercedes-Benz in 1955. After Fangio retired, Moss took over the mantle of the best driver in the world winning 16 Grand Prix races. 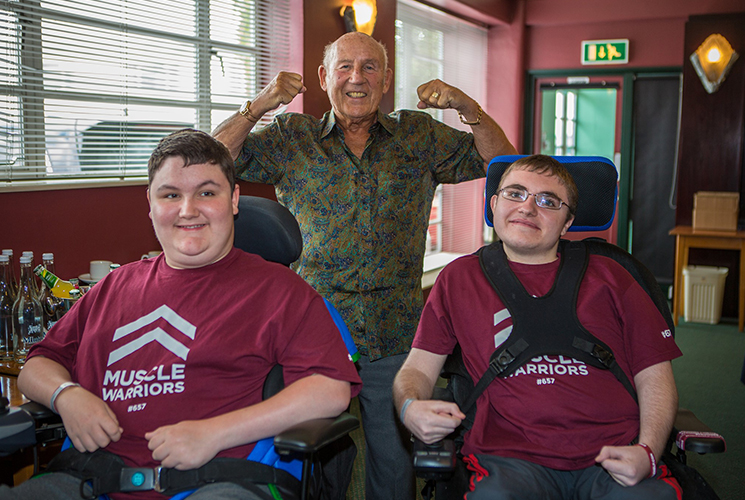 But it was Lewis Hamilton (pictured below) who proved to be the star attraction. Will could be seen mouthing “oh my God” when the World Champion entered the designated green room, warmly greeting the two Muscle Dream beneficiaries. 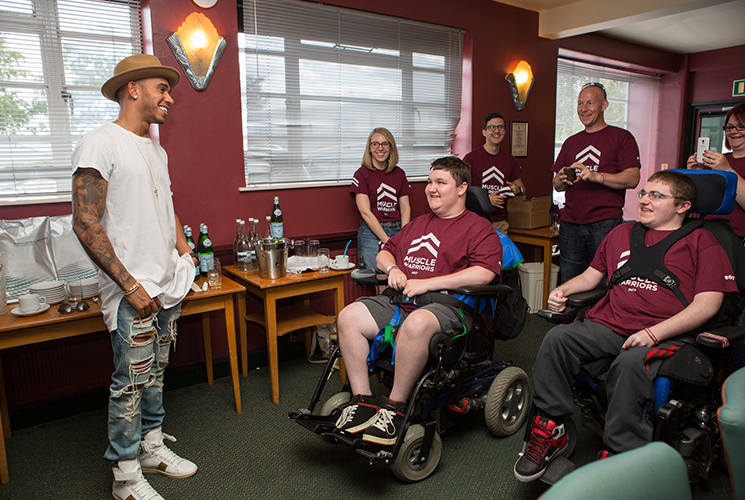 Cory (pictured below) wasted no time in getting to know Lewis, asking the F1 hero about his greatest go-kart race. Winning a race from behind always proved memorable came the reply, with Lewis recounting one race where he went from fourth to first in one corner. “It was one the greatest feelings.” he said. 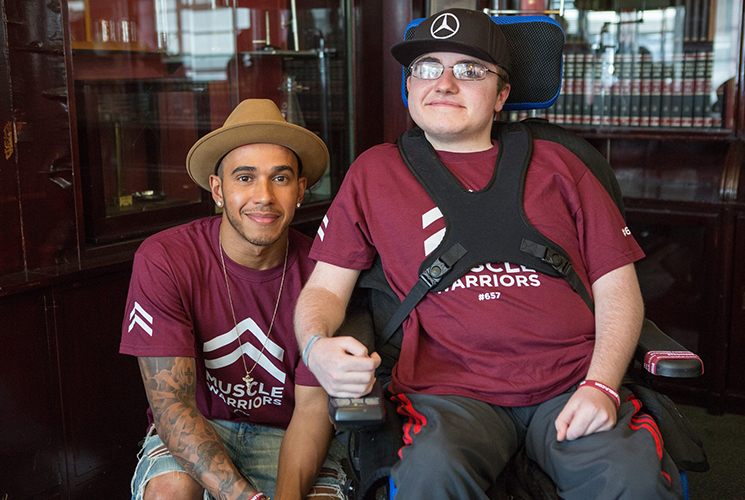 Will asked why Lewis chose the number 44 for his car. “It was on the number plate of my Dad’s old car,” Lewis smiled, adding that it had indeed bought him good fortune.

Lewis and Nico were also invited by MHF’s CEO Michael McGrath to strike the charity’s signature Muscle Warrior salute for the cameras and the British champion even donned one of our famously distinctive burgundy T-shirts. The salute is a visible symbol of hope, courage, strength and unity for all those with muscular dystrophy across the country. 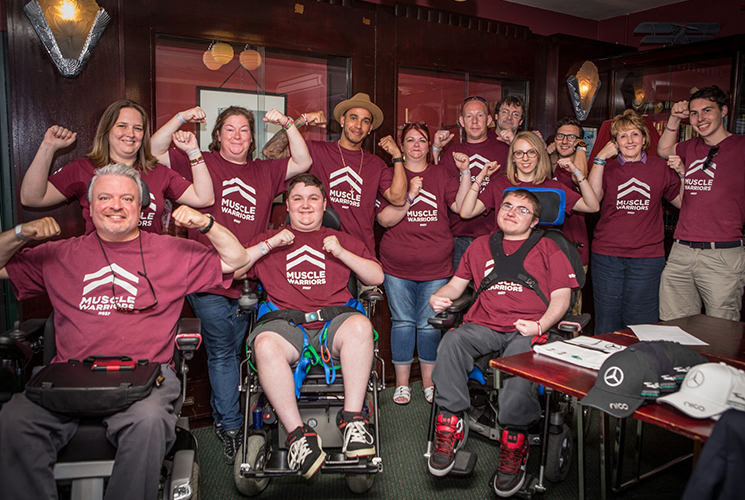 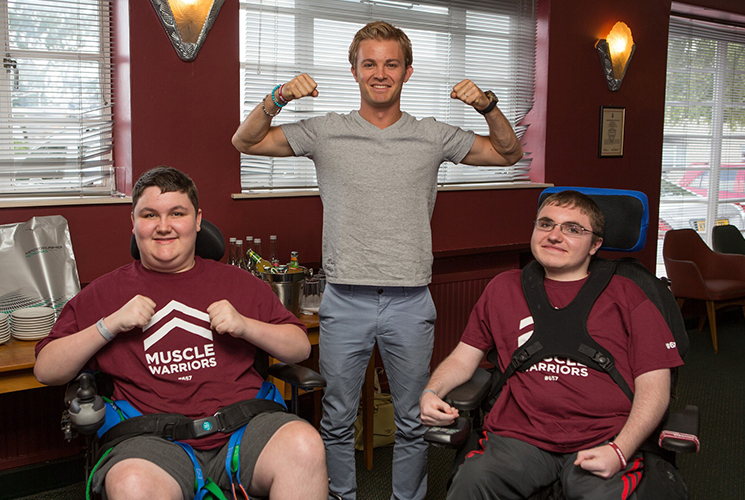 At the end of the meeting, Cory and Will were presented with a raft of signed goodies, and thanks to the fabulous team at Mercedes, an authenticated part of a F1 car was revealed and presented together with certificates indicating where and when the part was on the track.

Cory, Will and their families were also able to enjoy the rest of the Mercedes Family Day at Sywell, which included a barbeque, funfair and air displays. MHF volunteers manned a display area at the event and nearly £400 was raised in cash donations from the event. 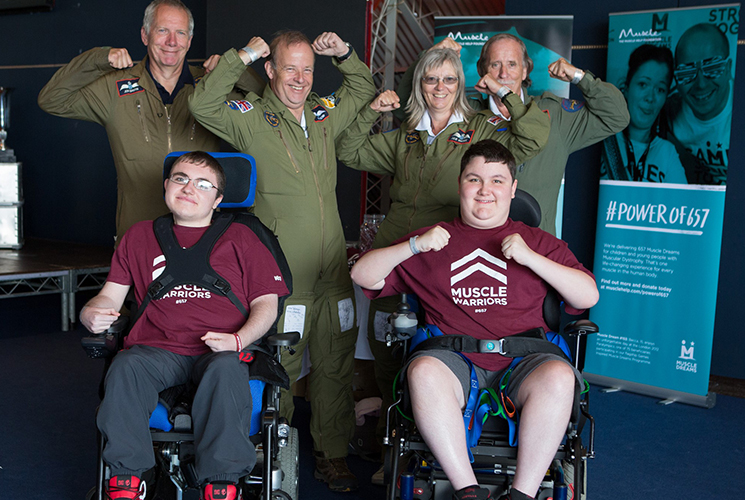 Michael McGrath said: “It was a magical experience for both Cory and William to meet Lewis, Nico and the legend that is Sir Stirling Moss. A colossal ‘P1’ Muscle Warrior salute to MERCEDES AMG PETRONAS F1 and those individuals in the business that quietly behind the scenes made it all possible. MHF hopes that this will be the start of an amazing partnership that changes lives and gives hope to many more children and young people with muscular dystrophy – watch this space!”