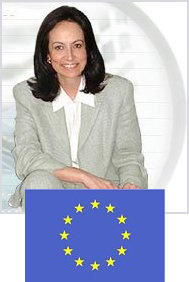 We wish you every success with your project.

NOTE – the following information extract has been sourced by Michael McGrath from: europa.eu.int/comm/commissioners/diamantopoulou/main10_en.html

Approximately 38 million Europeans, ten percent, have a disability. Throughout the Union people with disabilities face barriers not only in finding and keeping a job but in finding accessible transportation, entering buildings and facilities and getting into education and training. In addition they face barriers in gaining access to the technologies that would help them participate more fully in the workplace and in wider society.

Disability policy today is moving towards a standpoint which no longer sees the physical or mental implications of an individual as the primary issue, focusing instead on their potential for social and labour market participation and on respect for their human rights. Citizenship for people with disabilities is understood as a commitment by governments to people with disabilities that they will not suffer discrimination or marginalisation. This commitment is gradually being given appropriate legal embodiment in the form of enforceable anti-discrimination legislation.

Whilst responsibility for upholding these principles lies with individual Member States, the European Union aims to provide a platform to help achieve them. To this end, the Commission provides assistance under the mainstream European Social Fund operations to help with integration into the jobs market. In addition the EQUAL programme (2000-2006), includes specific provision for activities to combat discrimination against disabled people. Our proposed initiative to make 2003 the European Year of People with Disabilities was adopted in December 2001. This is aimed at stimulating wide-ranging national involvement.

In September 1999, she was appointed Member of the European Commission responsible for Employment and Social Affairs. In 1996, Anna Diamantopoulou was elected first Member of Parliament for Kozani and was appointed Deputy Minister for Development with the industry portfolio: major privatisation projects in the ship-building industry were completed, a large number of problem firms were privatised, while institutional reforms were introduced with a view to implementing innovative industrial restructuring measures and supporting regions in decline.

2003 – European Year for People with Disabilities

This is the European flag. It is the symbol not only of the European Union but also of Europe’s unity and identity in a wider sense. The circle of gold stars represents solidarity and harmony between the peoples of Europe.

The number of stars has nothing to do with the number of Member States. There are twelve stars because the number twelve is traditionally the symbol of perfection, completeness and unity. The flag will therefore remain unchanged regardless of future EU enlargements